The original The Legend of Zelda: Skyward Sword launched very nearly a decade ago as part of the Zelda series’ 25th anniversary celebration. And while it took us earlier in the long-argued Zelda timeline than any game before and showed just how our ever-reincarnating, tunic-ed hero Link came to be, it wasn’t received very well. Professional critics and fans noted the game’s motion controls and linearity were a detriment, and while I cannot say the latter really bothered me that much, the former certainly did. In many ways, it made the original game unenjoyable. Now, Nintendo has given Skyward Sword a second chance, fresh with a treasure chest of quality-of-life changes and the addition of traditional button controls. Now the question remains: With most of the game’s missteps fixed, is it actually good?

And of course, the answer is yes. This is Zelda, and rarely can I say that a Zelda game is bad. While Skyward Sword isn’t the greatest adventure Link has ever embarked on, Skyward Sword HD — with all its tweaks and changes — turns an otherwise irritating gameplay experience into something wholly fun. Skyward Sword HD is the definitive version of this game and, really, is the only version I’d recommend playing.

The Legend of Zelda: Skyward Sword was the last major “traditional” 3D Zelda game before Breath of the Wild came along and tossed everything we thought we knew about the series out the window. Like Twilight Princess, The Wind Waker, Majora’s Mask, and Ocarina of Time before it, Skyward Sword HD sees Link traveling the world, visiting vast dungeons, solving puzzles, fighting enemies, and partaking in a few side-quests along the way. In Skyward Sword, we see the canonically earliest version of Link as a knight-in-training in Skyloft, an island town that floats high above the clouds.

At the start of the game, Link is preparing for the Wing Ceremony — an annual practice that celebrates Skyloft’s worshipped Goddess. A series of events leads to his partner in the Ceremony, his childhood friend Zelda, falling to the storied surface world. Naturally, it’s up to Link to save her and uncover the mystery surrounding Skyloft and the surface. Skyward Sword’s themes of destiny and the scale of its story make it one of my favorites, and it’s all only made better by its great cast of characters. Series staples like Zelda are given more to do (and more to say) while newcomers like the perpetually-memed Groose layer on tons of charm. 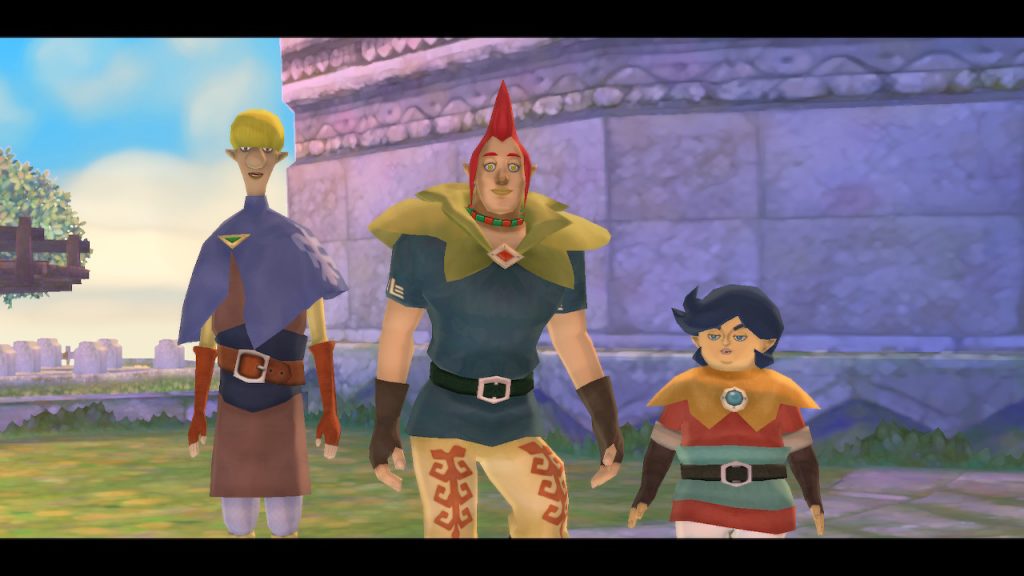 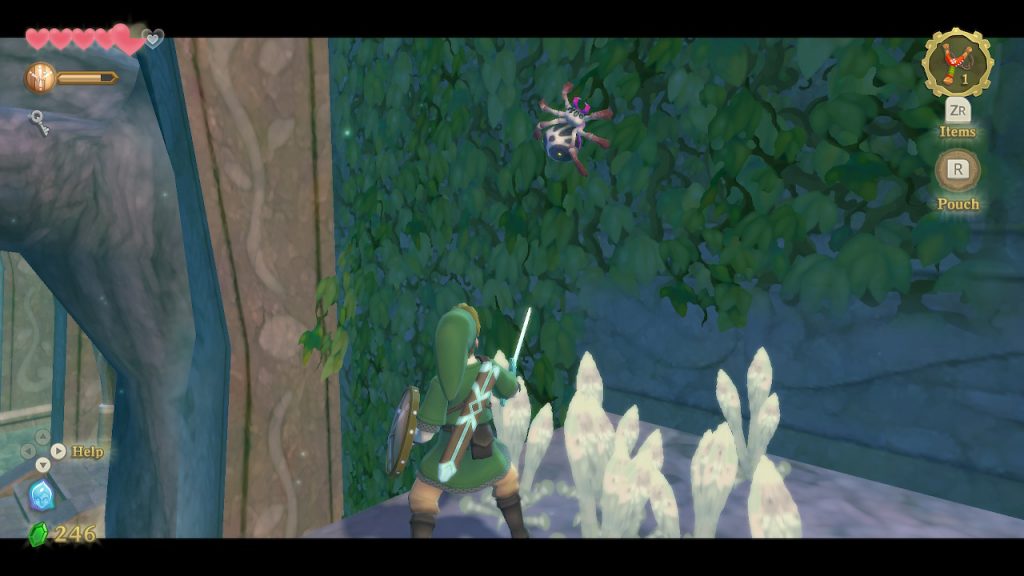 But it doesn’t matter how great Skyward Sword HD’s characters and story are if the gameplay isn’t solid. When you aren’t flying around Skyloft on your Loftwing (that big red bird you see in Skyward Sword’s official art) helping the sky folks with their various problems, you’ll be exploring the surface. Like Zelda games of the long-ago (in the time before Breath of the Wild), Skyward Sword is built around a series of dungeons each with a distinct theme and an introductory area that serves as an appetizer. Every location is a delight (with the exception of Lanayru Desert, with pretty much everything about its quicksand mechanics), with varied objectives to complete before you can enter each area’s dungeon. For example, finding five little forest creatures or finding all the parts to the key to a dungeon’s entrance.

One of my favorite parts of Skyward Sword is the variety of tools you have at your disposal — especially tools unique to this entry. Aside from the familiar slingshot, bow, and bombs, you’ll also get items like the Beetle and Gust Bellows. Best of all, they all end up serving a purpose in your exploration of the game’s dungeons. While each dungeon’s completion depends heavily on one tool that can be found inside it, they also incorporate all your other items into puzzles and traversal in ways prior Zelda games hadn’t. Everything you carry feels important and everything serves a purpose.

At the end of each dungeon, you’ll encounter a boss that tests your skills using your various items or your swordsmanship. Most bosses are unique and a lot of fun to fight, although there are a few repeated battles that occur when I would have liked to see a new baddie. Enemy variety is also high, and if you’re coming off Breath of the Wild, you’ll be pleased to know that there are tons of monsters to slay here, each requiring different approaches.

Skyward Sword’s art style was something we’d never really seen before in a Zelda game — it had the bright color palette and pseudo-cel-shaded look of The Wind Waker mixed with watercolor-esque textures. It was a gorgeous look I was really fond of on Wii, though it wasn’t at its best in paltry standard definition. Now that we have a 1080p HD remaster, Skyward Sword’s art direction can really shine. Everything and everyone in the game looks better than ever: clean and crisp and without the muddiness of the Wii version. And let’s not forget to mention that silky smooth 60 fps.

On top of that, Skyward Sword’s fully-orchestrated soundtrack returns in the HD version. Every one of the game’s epic music pieces perfectly captures the game’s diverse locales and your actions within, from exploring the relatively-calm Faron Woods to soaring high above the clouds on your mighty Loftwing. And don’t get me started on the Ballad of the Goddess, one of my all-time favorite Zelda tracks:

As a Wii title, the original Skyward Sword was built around motion controls. So when bringing the game to Nintendo Switch, the developers had to not only tweak the controls for a gyro-only system but also incorporate a traditional button scheme. During my time with the game, I tried it in both docked and undocked, with motion controls and button controls, and I’m pleased to say the developers did a great job adapting it. With button controls, sword swings are mapped to the right control stick. So, for a swing to the left, you just have to move your right stick to the left. Gyro is still enabled for certain actions in traditional-control mode, like dowsing or aiming your slingshot. 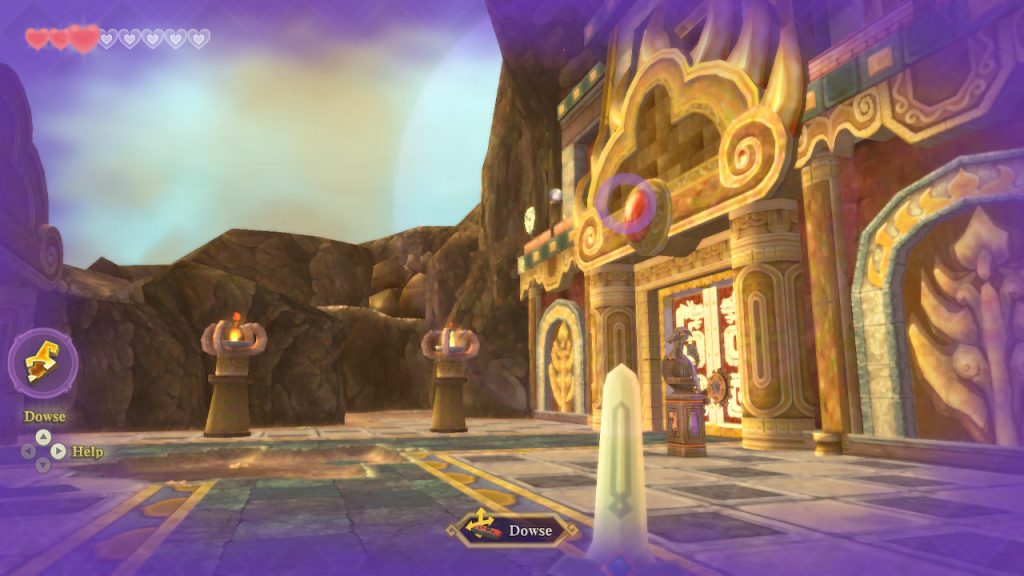 I cannot begin to explain how much more enjoyable Skyward Sword is when you can just lean back and relax with your Pro Controller and not have to wildly and constantly swing your arms around. Playing the original version on the Wii felt like a chore: I’d have to dig out my Wii Remote and Nunchuk, attach them, calibrate them (often multiple times in one playthrough), and then spend my time fighting with the motion controls to do what I wanted them to do.

One of my biggest annoyances in the original game were the Deku Baba enemies, which opened their mouths a certain direction and required you to swing your sword to match. On the Wii, my swings didn’t register correctly half the time, meaning I’d spend longer than usual fighting these stupid things. In the Switch version using button controls, I can easily just tap my right stick in whatever direction I need without worrying about the wrong way being picked up. Soaring through the sky on your Loftwing also feels a lot better; instead of swinging your controller, all you have to do is simply press “A” to flap its wings.

If you’re a fan of the game’s original control mechanics, you can use the gyro controls in the Joy-Con to simulate them. I tried Skyward Sword HD’s motion controls and was as much of a fan of them as I was the Wii version’s. They just aren’t for me, and with the added addition of gyro sensor drift (and having to reset with “Y”), they just felt more cumbersome than anything. I’m not a hater of motion controls in games by any means — WarioWare: Smooth Moves, Nintendo Land, Super Mario Party, and Wii Party are all great times — but when it comes to something like Zelda where your survival depends on precision sword swings, they end up becoming a roadblock in my enjoyment.

Aside from the changes to Skyward Sword’s controls, the Switch remaster also introduces a variety of quality-of-life tweaks. Fi, your ever-talkative companion, no longer pops up to advise you on every little thing. While she still shows up for story moments and at times when your objective may not be totally clear, she’ll no longer jump out to tell you something exceedingly obvious or redundant. If you still want to hear what she would have originally told you in the Wii version against your will, you can still hit the down button on the D-pad when her icon flashes, but otherwise… 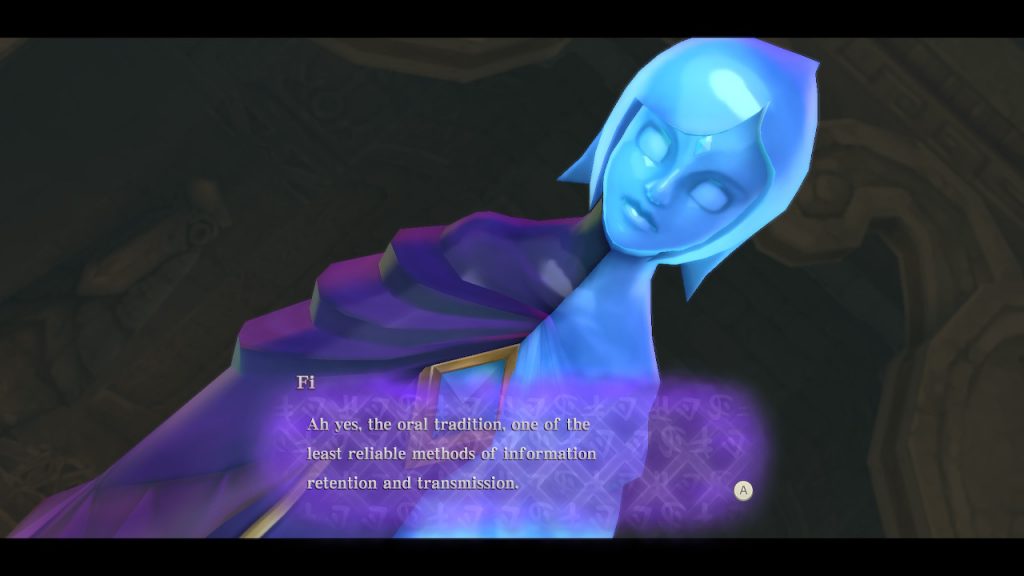 Other improvements include removing item help text from appearing each time you pick up a collectible or another item (in the original, you’d see the same text appear every time you picked up an item after relaunching the game), the ability to skip cutscenes, and a way to fast-forward dialogue by holding “B.” There’s also amiibo functionality with one specific amiibo — Zelda & Loftwing — which allows Link to jump between the sky and the surface at will. All of these changes add up to turn Skyward Sword HD into the best version of the game, period. 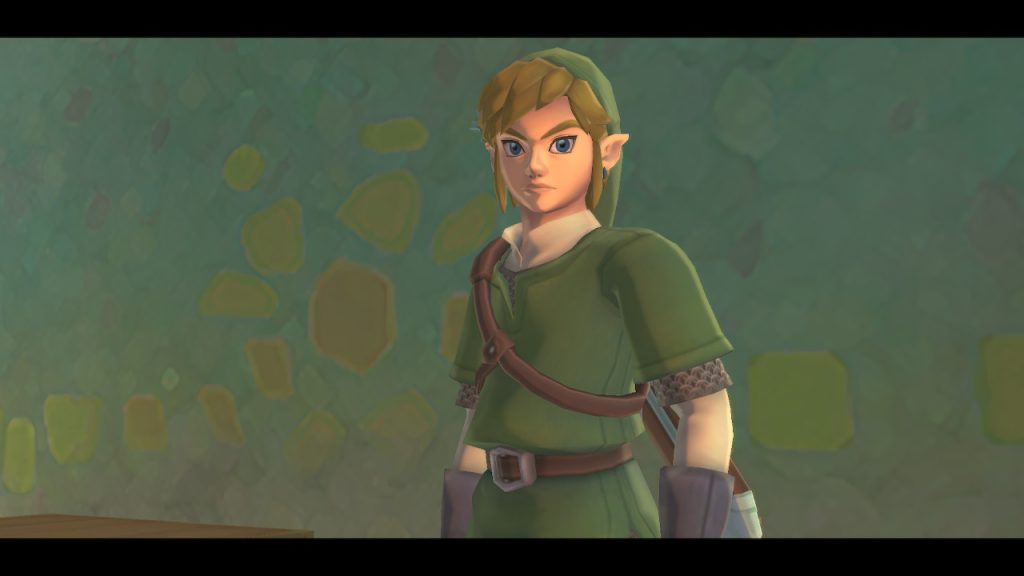 The Legend of Zelda: Skyward Sword HD is the ultimate way to experience Link’s original 2011 adventure. The Wii version was never a bad game, just hampered by clunky motion controls and other quirks that have mostly been corrected. What’s left in Skyward Sword HD is a fantastic journey with beautiful and varied locations, puzzling dungeons, memorable characters, and one of the best stories in the Zelda series. It’s nice to finally have a traditional 3D Zelda game on the Switch (albeit a remastered one), and if you’re hungry for a Zelda game that does what a Zelda game does best, I cannot recommend Skyward Sword HD enough.

Buy at Amazon Buy at GameStop

Procedurally generated card collector Cardaclysm: Shards of the Four claims a home on Xbox and Switch

Blissey joins the fray in Pokémon Unite on August 18th