To review any iteration of Tetris isn’t so much based on the game itself, which is about as iconic as any game (puzzle or otherwise) can be, but rather what it does to its familiar falling block formula. I’ve had the fortune of diving into two Puyo Puyo Tetris titles in my time, and even there I didn’t dwell on  its Tetrisisms all too much. They and the likes of Tetris 99 feel fairly similar even with their differences. That’s not a bad thing, for when I want competitive Tetris or the signature elements they both bring I know exactly where to go. By changing the pace and presentation into something more abstract, Enhance has created a more substantially unique experience that can exist even with dozens of past variants, and manages to stick with you once you’ve stopped playing.

Living up to its namesake, that’s the Tetris Effect.

Again, much of this game’s appeal comes from its audio-visual design. Not so much the fact that it delves into imaginative dreamscapes as backdrops for its square stacking (which it totally does, and does well), but in how it melds these with the gameplay. Tetriminos shake and shimmer as the backing track sets the pace of your play, with things altering as you go. A tribal setting will come to life with flames as spectral natives arrive to worship the growing intensity, beat swelling all the while in tribute to your deepening trance — it’s something I’d have never paired to Tetris, but it works.

In its single player “campaign” (more fittingly called a Journey) you’ll take on multiple songs/visual themes in a row with the goal being to clear a set amount of lines. Rather than stressing over T-Spins and incoming attacks — my more typical headspace when playing Tetris these days — it benefits you to instead turn your brain off to a point. Surrendering a bit and shutting out the world around you heightens the experience for sure, and while the fall speed can build up, it all feels natural. Your score might climb up, and you may even improve along the way, but settling down into Tetris Effect’s flow is the real reward.

That may not appeal to everyone’s sensibilities, but I highly suggest stepping into this fugue state if you can. Enhance’s previous puzzle endeavor, Lumines Remastered, brought on a similar effect (and praise) from me, but while that game was more about challenging yourself to get further and further through its soundscapes, Tetris Effect is happy to have you along for the ride with the lights out and headphones on. Ethereal as it can be, the vibes are almost all chill here — you need not be a Tetris expert to see this one through, but you might just want to become one by the time it’s done.

Beyond its starlight cetaceans and symbolic march of time (at least that’s my interpretation), Tetris Effect did add something new to the core gameplay experience of Tetris. Clearing lines will fill a Zone Meter, allowing you to stop time and dial back the visuals as it starts to run out. This muted moment allows you to take a moment or two to plot your moves more carefully, but those that come into prepared can achieve Tetris heights never before possible. 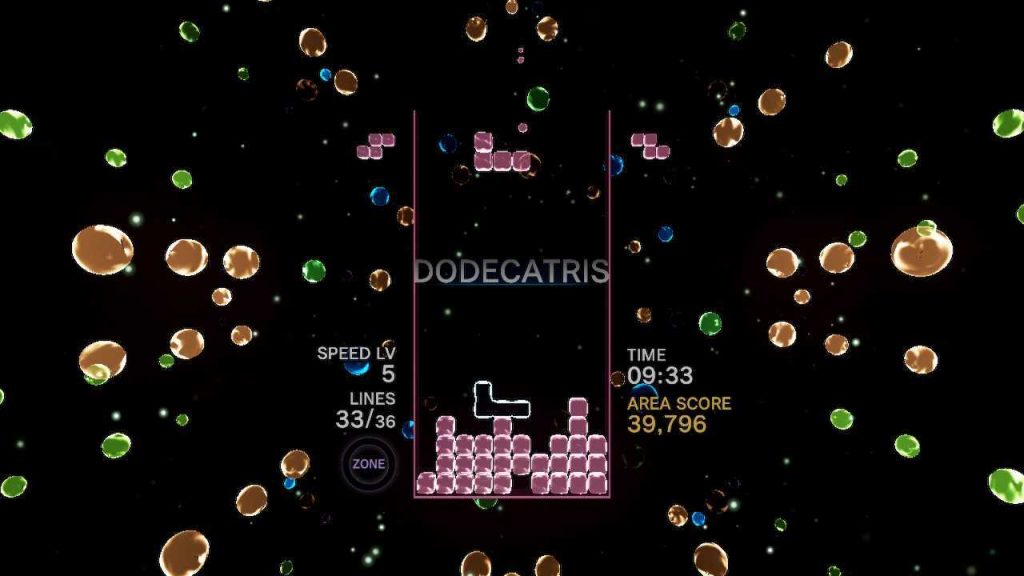 You see, it’s called a Tetris because you’re clearing four lines. But in the Zone, your line clears instead add up, staying on screen until the meter depletes. What they do instead is push your blocks upward, meaning every line cleared readjusts your play area, letting you access any gaps you may have made along the way. As you clear through these as best you can, you’ll eventually snap back to the normal flow of things and achieve feats like Octorises and Dodecatris — eight and 12 line clears respectively. You could even push beyond the veil of board possibility and achieve a 21 line Kirbtris, or perhaps even more if you aim for further puzzle greatness.

Outside of Journey Mode, you’ll also find Effects. These take the stages and songs of Journey and puts them into themed sets, meant to evoke certain moods or themes. Some coax you into relaxing while others demand focus, giving you a microdose of what the game is all about. I enjoyed some of these based on my moods, though I appreciate the fully tailored Journey more than these abridged tastes. 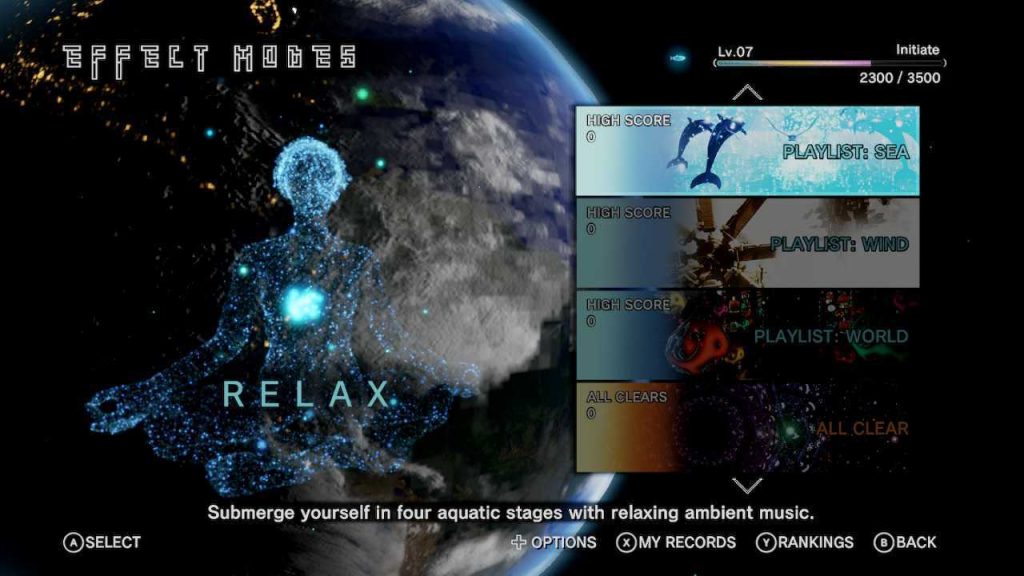 The last, main piece of this release is in its subtitle. Though the wait has been long, this is Tetris Effect: Connected and includes multiple multiplayer options to lose yourself in as well. While competitive VS. modes are there, I didn’t get the same rush from these as I did from Tetris titles that were more built around that idea. Competitive Zone Battles can be fun, but it’s in Connected’s namesake multiplayer offering that it gives us something new.

There three players will be working together to take on a Zodiac themed boss, playing individually to clear lines and handle attacks and detrimental effects. Once sufficiently juiced, you can then merge the three play areas and move beyond their boundaries. Being able to slide over and clear lines on my ally’s sections (though at the time they’re fully communal) feels more natural for a game that aims to be less intense and more transcendent. 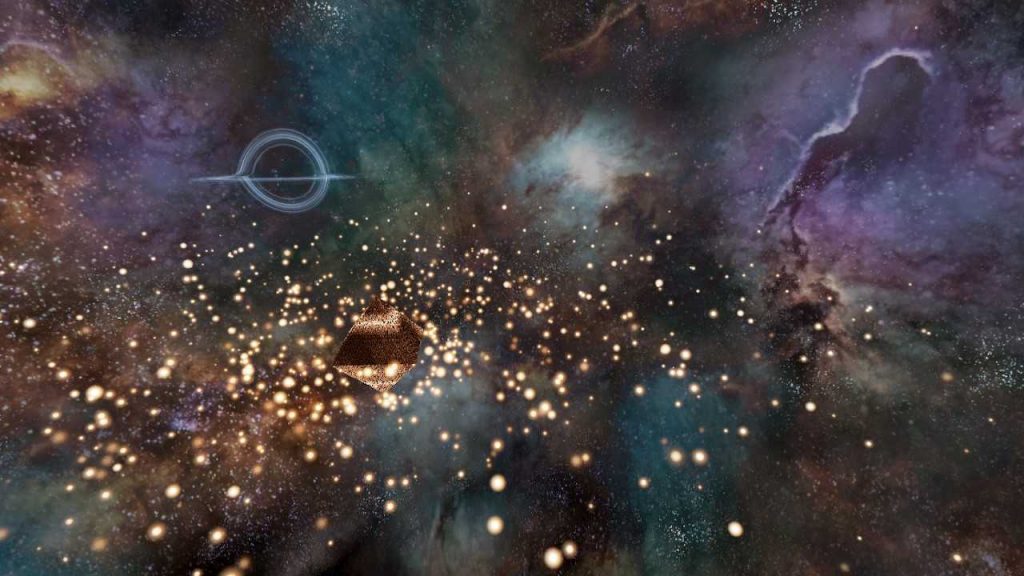 As interesting and reflective of its ethos Connected is, Tetris Effect still felt at its best as a solitary experience. Handheld playing in particular, with the screen up closer and headphones in, was about as alluring as playing on my TV with the music all around. It should be noted that the visuals, a core piece of this experience, take a hit in that configuration. Gameplay was perfectly fine in my experiences, but I’ve seen the game prettier on other platforms.

While Tetris as a whole is never going anywhere, I’m hopeful that Tetris Effect can grow as a sub-series for the gaming legend.  It takes a stroke of genius to make a game as codified in the collective unconsciousness as Tetris unique again, and yet here we are. It doesn’t reinvent the squares nor does it rest comfortably within the expected. Instead, it becomes something that’s more suited to modern expectations and sensory enjoyment. I urge you to approach Tetris Effect: Connected not with an open mind but instead an empty one, letting it take the lead and trusting we’re all in its good hands together.

Ending The Keto Weight-Reduction Plan – Do You…

Ending The Keto Weight-Reduction Plan – Do…

Seth Rogen Is All Loved Up Lauren Miller At The…