Note: The review copy distributed was for the Steam version. Thus, the review may not reflect how the version on Switch performs or differs.

I have discovered the truth of this world. And that truth is that AI: The Somnium Files – nirvanA Initiative might just be one of the greatest video game sequels I’ve ever played.

That might sound slightly hyperbolic, and I’m sure that when my feelings on the game have settled down I’ll have a clearer picture of what it is and how it measures in the grand scheme of things. But take it from me: any adventure that compels me to stay up til 3 in the morning just to see where it goes, that provides such gripping suspense alongside off-the-wall hilarity, and that simultaneously pulls at the heartstrings and oils the cogs of the brain is a supremely entertaining piece of art.

nirvanA Initiative is the latest from Team Zero Escape, notable for its lead writer and madman Kotaro Uchikoshi. A follow-up to 2019’s excellent AI: The Somnium Files, NI details the “Half-Body Serial Killings,” a series of grizzly murders where victims are sliced cleanly in half and have their bodies placed in separate locations – and 6 years apart. It follows fan favorite Mizuki (elevated to protagonist) and newcomer Ryuki as they investigate crime scenes, scrub POI’s dreams for clues, and deal with so, so many dirty jokes.

First, I don’t know if I can put how much I love the decision to make Mizuki (already the best character in the first game) one of the core protagonists this time around. I have a hard time putting my love for Mizuki in general into words. I feared that propping her up as the POV character might diminish her charm, but instead it propels her even further into video game stardom: lovably aggressive, amazingly quippy, monstrously strong, and poignantly emotional. Seeing her partnership develop with Aiba from the last game (along with another character who I dare not specify) make my heart swell. She’s the greatest character Kotaro Uchikoshi has ever written, and he could make the next game 30 hours of her bickering with her adoptive dad Date and I would buy it ten times. I adore her. 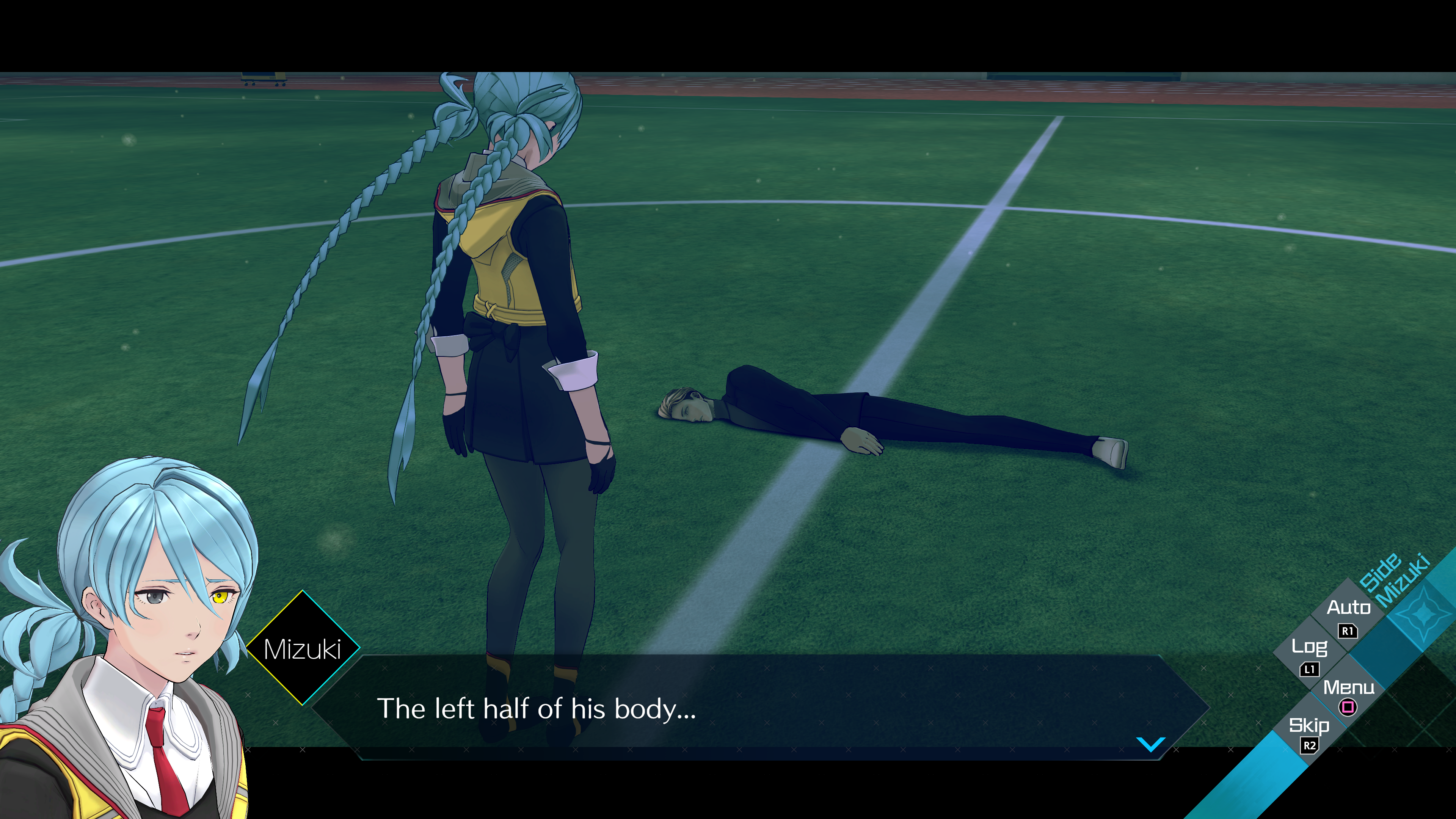 My love for Mizuki was so strong even before playing that I worried a little that I would find Ryuki, her counterpart and equal in the game’s narrative, a bit boring in comparison. But he’s also great – an overly earnest, self-destructive man who is going through some… issues. His dynamic with his AI-Ball and partner Tama feels a bit like the first game’s Date/Aiba dynamic flipped on its head, with Ryuki providing the tired straight man to Tama’s raunchy jokester. While I wouldn’t say my affection for him surpasses (or even equals) the game’s other protag, he’s more than a worthy character in his own right, and I’m glad he’s here.

Indeed, I’m glad almost everybody is here – the first AI’s strength was in its cast, and nirvanA Initiative continues that tradition in aplomb, doing a great job of bringing back some principle characters but for the most part introducing fresh faces. I loved seeing bit characters like Amame from the mermaid cafe get an expanded roll, as well as newcomers like kid genius Shoma and giant with a heart of gold Gen. Not everyone is a winner (Ota is still here for some reason, and among the new castmates I have some pretty mixed feelings about starry-eyed lover Lien) but by and large the same lovable character energy is prevalent. 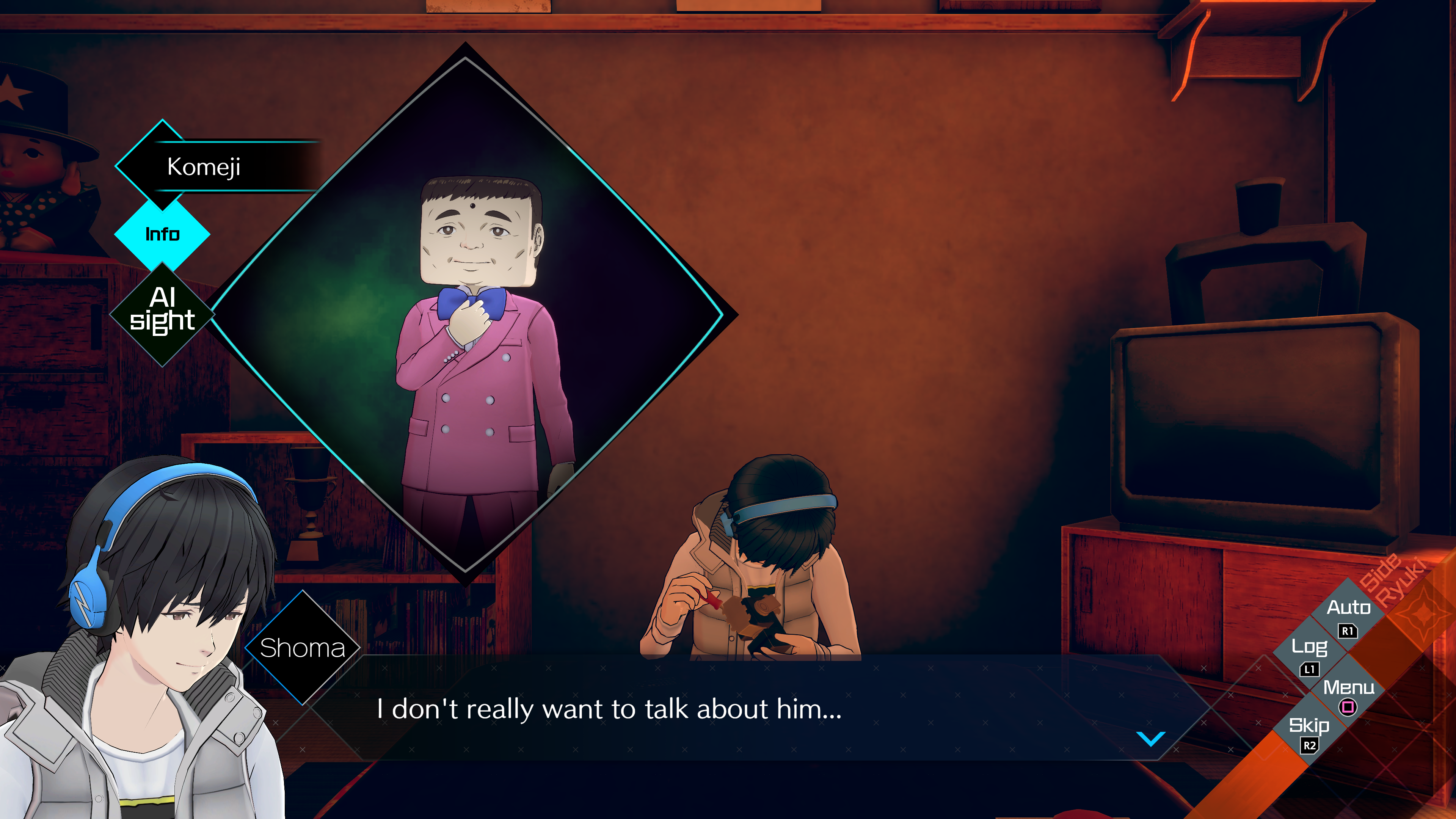 If the first AI was already stupid and horny, (and it was), the sequel has gone through what I can only describe as bimbofication. You’d think not having a man as degenerate as Kaname Date as your lead would make the frequency of sexual innuendoes go down, but it feels like the game has gotten somehow more lascivious. Whether you find such stupid lewd jokes disgusting or gutbusting will depend on the person, but alongside a touch of referential humor and a wild amount of absurdism, nirvanA Initiative ends up more funny than not. The best phrase I have to describe it is “Artisanal Shitposting.” It is so dumb. So gloriously, wonderfully dumb. It takes a lot of effort and intelligence to be that dumb. And while some of the grossly funny lines can whiff and end up just gross, the shotgun approach to humor pays off. Even if it does occasionally remind me that Anime Was A Mistake.

As an adventure game, the story is mostly what matters, but AINI has definitely made improvements on gameplay. While largely a repeat of the first game’s mechanics, there are some additions that stand out – like the Wink Psync that allows you to read one character’s mind briefly, or Virtual Reality segments that play out more like classic detective work as you gather clues and piece the scene together. The addition of more game flavors is rarely a bad thing, and these ones gel quite well with the extant pieces.

The main feature, of course, is Somnium – the psychedelic dream state of subjects that Mizuki and Ryuki traverse to find clues in six minutes’ time. As metaphysical manifestations of subconsciousness and large puzzles, Somniums are the star feature for good reason – endlessly creative, striking a wide variety of theme and tone depending on the situation. From a horrific quiz show to a bizarre laboratory to stark white rooms, each provides a strong and distinct presence. All of the ones in the game are excellent, and whereas the first game’s final Somnium felt a bit like an afterthought, the last one here feels appropriately tense, climactic, and heart-pounding. 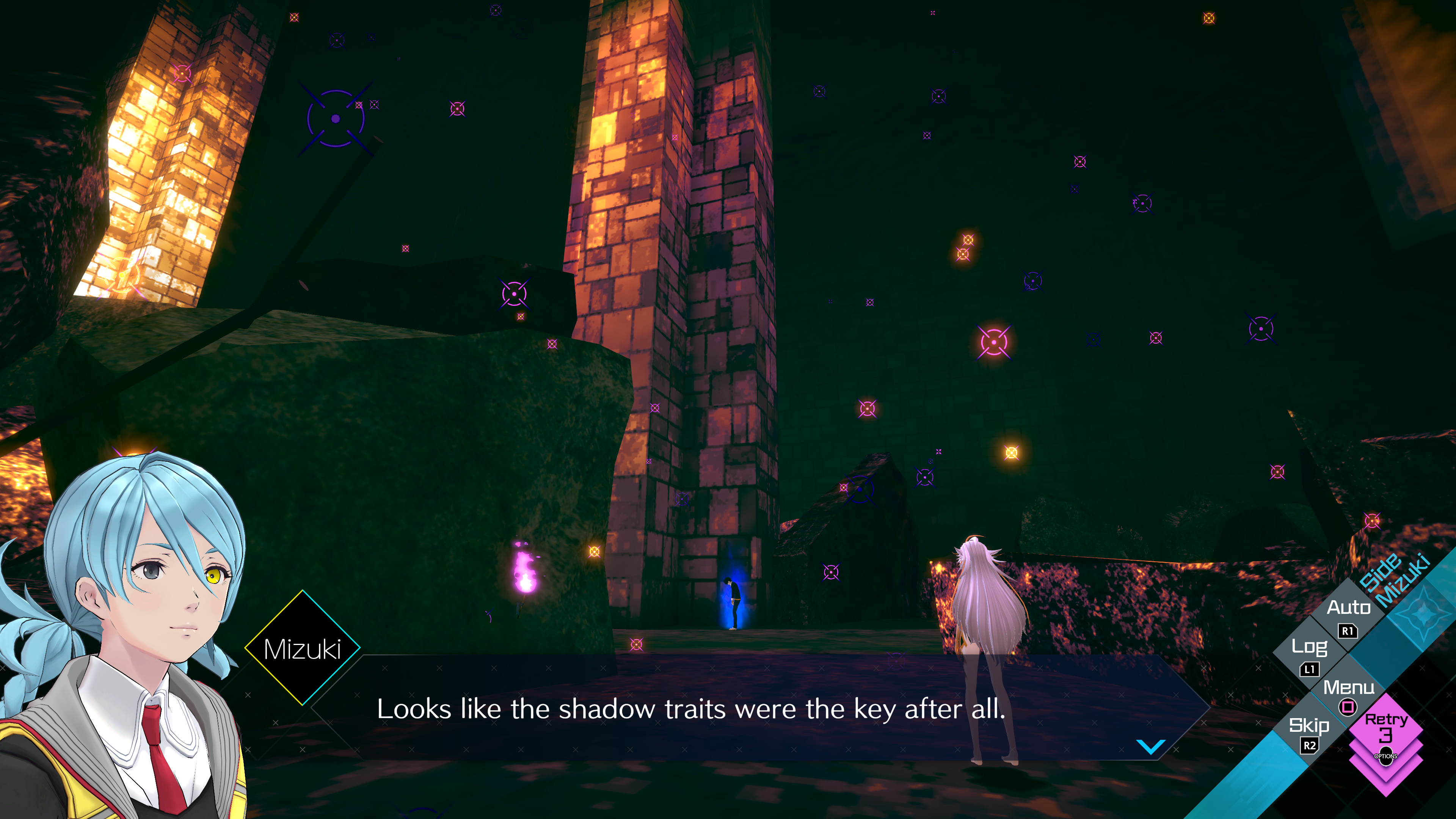 Tension is one of Uchikoshi’s greatest writing strengths – there were countless moments where I was gripping the edge of the seat or holding my breath waiting for something to happen. His mystery writing is also as on point as ever – I was theorizing and thinking from the start of the game to the credits (and beyond!) And his plot structuring, which is stunningly linear this time around – though there are plenty of surprises in store. Coupled with a wicked (if Egregiously Bawdy) sense of humor, heartfelt sincerity, and a stunningly good management of tone most of the time, and it’s an adventure that will cause you to react with just about every emotion: love, anger, disgust, confusion, shock, all intended and unintended. If there is one area the writing does falter in, it’s Uchikoshi’s ability to write romance, which ranges from “I got what he was trying for it just didn’t quite click” to “why’d you have to make this weird, man.” That said, the way he writes about familial bonds made me cry more than once.

Of course, a game is more than just a writer or a director. Yusuke Kozaki’s character designs continue to be a treat, with maybe only one or two from the entire game that I didn’t wholeheartedly love, and Keisuke Ito on music is sharper than ever with his mixture of ambient calm and blaring tension (he even gets to let loose and pull out a Pokémon track pastiche at one point). Not to mention the voice acting, which I’m not sure I could praise properly. Every line is delivered exactly the way it needed to be. Corina Boettger as Mizuki somehow blew me away even more than they did the first time around, and every new addition or returning cast member is pitch perfect.

Does the game have flaws? Absolutely. Does the aforementioned sensual humor often step way over the line and get creepy? Yes. Does it provide a pretty sensationalist, occasionally tasteless depiction of murder or violence (though I would say it’s much improved from the first game’s gorier moments)? A bit. Does it convey the same pernicious message as basically all cop fiction that personal liberties and due process are impediments to justice and catching “the bad guys” is more important than following the law? Oh yes (Mizuki complains about warrants countless times. I give her a pass because she’s 18.). But nirvanA Initiative isn’t setting out to convey anything about realism. It’s here to take you on a wild ride of nonsense pseudoscience, Buddhist imagery, and conspiracy theories that all culminates in what just might be the wildest Uchikoshi twist yet. It’s hard to say for sure, given his immense legacy in the department, but I literally felt like I was going insane. I can’t remember a piece of fiction making me feel like that since the original 999. 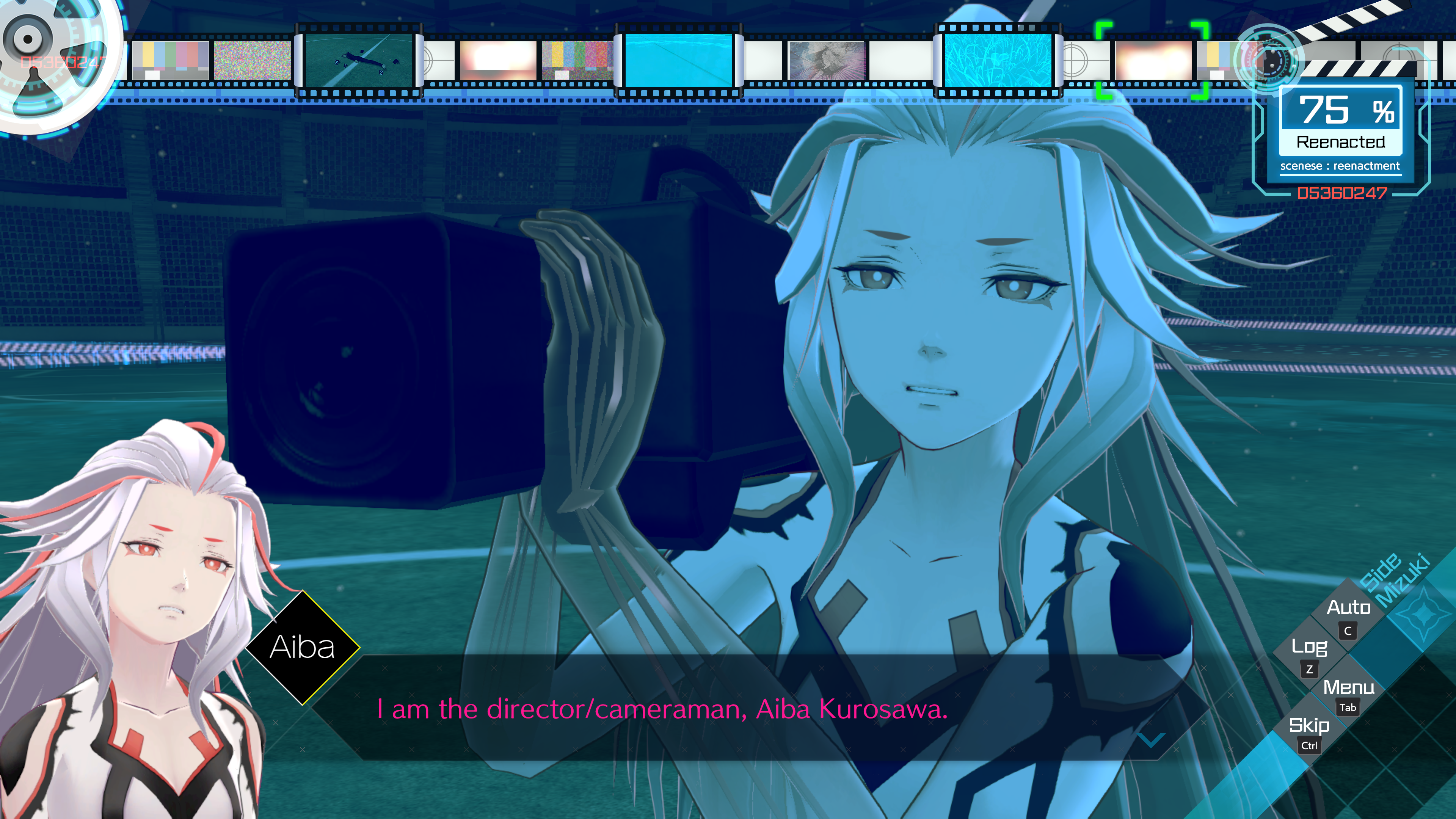 My previous favorite game of Uchikoshi’s was Virtue’s Last Reward, the second Zero Escape game that expanded the first game’s emotion and novelty to encompass a philosophical, thought-building, incomplete piece of art. Comparing nirvanA Initiative is strange – it’s far less theoretical, but far more emotional. Almost every single line in the game provoked some reaction in me. It was many things, but it was never, not even for a split second boring. And while nirvanA certainly has its intellectual side, it’s in service of something more humanistic and real. And in comparison to the cliffhanger ending of VLR, nirvanA is much more complete – even though it teases another game right at the end.

And I will happily buy it. And anything Team Zero Escape makes thereafter. I’ve been an Uchikoshi fan for almost a decade at this point, and nirvanA Initiative might be his most singularly satisfying experience yet – blissfully complete and fully itself. In an age where more and more media feels homogenized into a singular paste, there is nothing else like it. Its personality is so strong that you’ll find it either utterly repulsive or intoxicatingly magnetic. There are parts I hate, but so much more that I love. And accepting it for its flaws and everything that makes me roll my eyes or grit my teeth, alongside its deeply, deeply affecting moments and enticingly endless web of a plot – that feels truly enlightening.

What Is The Grandness Of Substantial Mixer Media Marketing In 2021?

Latest Mobile Handsets – A Design And…

How to barter My house With a Tax Lien